At the core of the Hydrowatt technology is a vertical axis turbine that drives an electric generator.
This compound turbine-generator device is mounted on the seabed in locations where it harvests kinetic energy from tidal currents or from steady flow currents. The device is simple, low-maintenance with a true 25-year design life (commensurate with the marine industry in general). Uncomplicatedness comes from the design which is very simple, with no gear box, no active blade pitch control, and no yaw control. The Hydrowatt device does away with gearbox and any active controls, using passively flexible turbine blades and a direct-coupled high-torque generator.

To optimally harvest the kinetic energy from sea current the turbine operates according to a modified Darrieus design with a vertical axis and where there is no central hub and where the generator is located at the base, away from the path of fluid flow. Any turbine technology using a central hub is disadvantageous in a marine application, reducing the yield when transforming water flow energy to a torque (i.e. turning moment). The Hydrowatt technology make the benefits of the Darrieus turbine thus very substantial in marine applications, the main reason being that water carries much more energy density than air. How it works, looking into the mechanics, is described here.

When a Darrieus turbine rotates, the blade angle is always changing as the blade makes progress about the central turbine axis. However, at any point in its progress, the blade angle can be optimised if the blade can rotate independently about its own axis. This is equivalent to a sailboat being able to extract power from the wind while travelling in (almost) any direction, except directly up-wind. However, its sail is much more effective if the sail angle can be adjusted independently of the boat’s direction of travel and the wind direction. 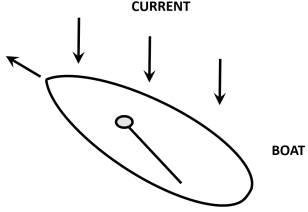 Basically, much the same principle apply for water (Hydrowatt turbine) as for air (sailboat).

To provide independent blade angle adjustment in a Darrieus turbine with active controls (i.e. a motor at each blade attachment point) would lead to a complex turbine. Hydrowatt instead uses a passive, spring-like flexibility in the blades or their joints to produce much the same effect, and a level of efficiency superior to a fixed-blade Darrieus turbine.

To further illustrate the concept of blade flex, consider the extreme case of a boat moving perpendicular to the wind. The analogous situation will occur twice during the rotation of a Darrieus turbine blade about its central axis. In this case, a fixed sail will generate no forward movement. However, an adjustable sail or blade angle will allow an asymmetric deflection of the wind and thus generate motion. Hydrowatt’s capability to self-start in low-flows represents a key advantage. This extends our load factor, i.e. the time electricity generated. 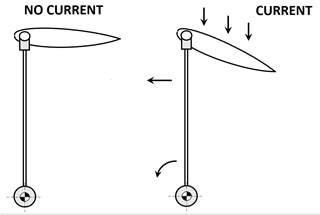 The extreme example of 90° incident angle;
Fixed Blades (left) generates no electric current
whereas Flexible blades (right) do provide a
torque to the electric generator